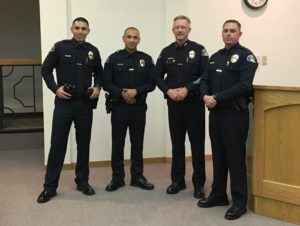 Police Academy in Santa Rosa for a year-long training program starting in January 2016. On December 12, 2016, he was sworn in as an officer by Ukiah Police Chief Chris Dewey, with two other new officers in a ceremony at City Hall. Proud family, friends and supporters were on hand to witness the milestone event. Cesar (second from left) is bilingual and active in the local community.