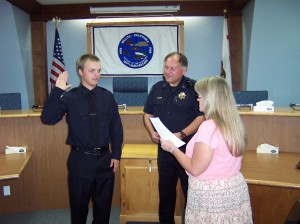 Cody Mason attended Santa Rosa police academy this year with his tuition and expenses paid by a loan from the Mendocino Public Safety Foundation, which will forgive the loan after Cody completes 3 years’ service with Willits or another Mendocino County police agency.   He is the first graduate of this program which is intended to help local men and women become peace officers who will stay in the county.

A prospective sheriff’s deputy, Alex Johnston, is currently attending the police academy with the Foundation’s financial support.   Men and women interested in becoming local peace officers should contact the sheriff or a local police chief, who nominate candidates for the Foundation’s consideration.

Tuition and expenses to attend the Santa Rosa police academy are from $5,000 to $7,000.   By requiring at least 3 years’ local service, the Foundation seeks to increase retention of police officers who might otherwise move elsewhere.

The Mendocino Public Safety Foundation funds the program with tax-exempt donations from concerned citizens.   Donations can be sent to P.O. Box 123, Ukiah 95482, or made by PayPal at www.ProtectMendocino.org.

Organized in 2011, the Foundation is a 501(c)(3) tax-exempt charity.  Board chair is former County Supervisor Jim Eddie of Potter Valley.   Foundation president is Ross Liberty of Ukiah and vice-president is Janet Orth of Brooktrails.   Sheriff Tom Allman and the three city police chiefs serve as advisers to the Board.

1 thought on “A New Policer Officer Funded by Foundation”