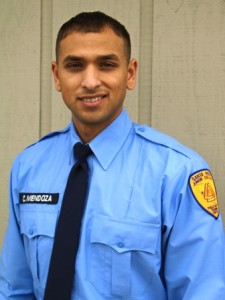 Cesar Mendoza of Ukiah started classes today at Santa Rosa Junior College police academy.  At the Foundation’s December 17 meeting, the Board received Cesar’s request with a personal interview and a strong endorsement from Chief Dewey. Financial support was unanimously approved, in expectation that he will graduate from the one-year program and join the Ukiah Police Department.

Cesar is a well-known local athlete who is fluent in English and Spanish. He works during the day at Home Depot and goes to police academy in the evenings. Ukiah’s population is approximately 40 percent Spanish speaking, and the police department has about 20 percent bilingual staff, so Cesar will be a welcome asset when he completes his training.