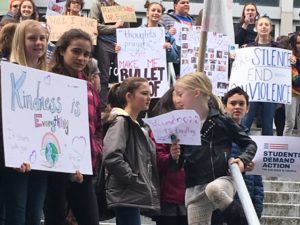 Ukiah students rally for gun safety at the Courthouse

Ukiah, CA – March 24, 2018: Local students gathered with sympathetic community members at Alex Thomas Plaza, then marched down State Street to the Courthouse for a rally to end gun violence. The event coincided with over 800 marches in cities throughout all 50 states and every continent except Antarctica. The groundswell of action followed the school shooting in Parkland, Florida on Valentine’s Day.

At our meeting of March 22, the Foundation discussed how we can constructively address the growing problem of gun violence, in ways consistent with our role as a 501c3 nonprofit organization. It is not the first time the board has considered this controversial issue. With a movement sweeping the country, now the time is ripe to reopen the conversation. We have several ideas and will consult our membership before proceeding with any major new program. In the meantime, we think it’s important to maintain an open dialogue and find common ground among our diverse community.