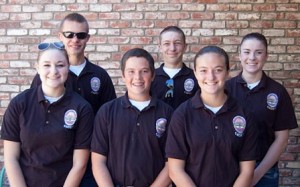 The program will fund peace officer or correctional officer academy costs for nominees of the sheriff or police chiefs, as a loan that will be forgiven upon three years’ local service as a sheriff’s deputy, corrections deputy or police officer, including service as a reserve officer.

“The Police Chiefs and Sheriff here in Mendocino County are extremely grateful for this new program being developed by the Mendocino Public Safety Foundation,” Dewey continued. “Being able to recruit and develop local applicants who have ties to our communities is essential for our future. Along with Sheriff Allman, Chief Mayberry and Chief Gonzales, I would encourage people to help us by donating to this new and exciting opportunity. Having the ability to recruit, develop and retain local law enforcement professionals is key to keeping our communities safe.”

The Foundation, in cooperation with the Police Chiefs and Sheriff as ex officio members, will invite applications. Materials will be available at www.protectmendocino.org.

Approved nominees would receive a conditional offer of employment or reserve office appointment upon satisfactory completion of Santa Rosa Junior College police academy or correctional officers’ academy. Loan agreements would be between the scholarship award winners and the Foundation.

The loans will cover academy tuition, uniform and equipment, as well as approved miscellaneous expenses, a value of approximately $6,000. Interest will be at one percent, with no repayment unless the candidate defaults under the agreement. The entire loan and interest will be forgiven upon completion of three years of service. The Foundation also may waive repayment under other circumstances. The Foundation plans to fund 2013 scholarships with its existing fund balance.

The Foundation, a 501(c)(3) charity, was organized in 2011 to raise private funds to assist local law enforcement. The Foundation is continuing to accept donations from the public, including local businesses. Donations are tax deductible, depending on the donor’s individual tax status.
100 percent of every dollar given by general donors will be passed on in support of local law enforcement. All Foundation personnel are volunteers, and fund-raising costs are funded by separate donations received for that purpose. The Foundation is governed by a Board of Directors headed by Jim Eddie of Potter Valley, a former County Supervisor.